The Ankara Train
Kars station had been refurbished but it still looked  exactly as it did 25 years ago when I first arrived here. Like much of the town, the station was built from the same grey stone that makes up the Russian era buildings and barracks. Ten carriages were hauled by a Turkish made General Electric diesel locomotive into the station at Kars. The doors opened and most of the people boarded. Except me of course, for I had run off to buy water, two peppers four pears and an onion from the manav (grocers) across the road. I walked swiftly back and Cisca and I loaded our bags into our cabin. Then I descended again, crossed the tracks and took a couple of pinhole photos of the train. A young serb was also taking photos. With the diesel engine chuntering away, it was an impressive sight. 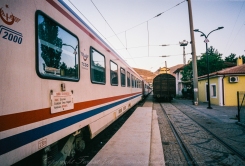 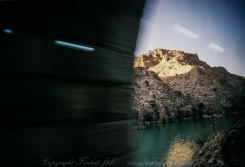 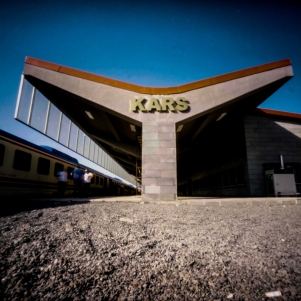 The Ankara train leaves Kars every day at 0800 twenty four hours later it arrives in Ankara. Officially it is called the “eastern blue express” but it is really the Ankara train. It connects the culturally rich city of Kars with the capital of Turkey.  It is the link between the Turkish border, and all the towns and villages close to it and the centre of Turkey. While Turkey may be constantly changing, the Ankara train is a constant, a solid unchanging link. For the line to Ankara was completed in the 1930’s by German and Turkish Engineers. They dynamited their way through the mountains at Divrigi and then laid track over the central Asian steppe to Erzincan, Erzurum and finally rising over the 2200m high pass it descends to Kars. The line has been modernised, but it will require the constriction of an entirely new track to allow high speed rail to run to the border. Until that time, the 1500km of track are served every day by a Turkish version of the trans Mongolian express. I rate it as one of the three most picturesque train journeys on earth. The first and second being in China. With these thoughts in mind, I climbed aboard one final time. The locomotive sounded its horn, the station master blew his whistle and the train rumbled slowly out of the station.

“passengers still boarding” came a command on the radio, “slow down” and the driver gently brought the train to a halt. The final passengers who had not been so fast on the manav trail climbed on board and we set off again. There were sad scenes as people came to see their loved ones off. A young man said goodbye to his friend, running alongside the track waving, while a families had loaded their loved ones onto the train. There were some tears, and some long faces. The conductor kept the door open near me and waved at the security guards and station master shouting his goodbyes. Clearly they were all friends. There was something definite about the departure of a train. It hooted, it huffed it puffed, there was noise and then the physical entity left in front of the eyes of the bystanders. A family walked by, an old man sat on a bench, the train rattled through the outskirts of kars. Tractors stopped ploughing, women stopped with their children to look and wave. For this was the Dogu Mavi departing Kars. The time capsule that would leave the frontier and a day later arrive in the centre of power.

We descended along the steppe slightly and then climbed up into the forests of Sarikamis. After the forests, the dogu mavi trundled along at 80-100 kmh, through brown grass fields. We were clearly on the central Asian steppe in the height of summer. Some hours later, we pulled into the city of Erzurum. Here at 2020 metres of altitude, the air was pleasantly cool. The train stopped for 20 minute to rewater the carriages and refuel the locomotive. We had been on the go for five hours. Most of the passengers hopped off to have a smoke, but I had other ideas, I raced off up the platform and took a photo of the locomotive. The driver smiled at me, benignly as I then hurried back along the platform. I reminded myself not to wear flip flops on a marble platform.

To my consternation, the Dogu Mavi was dry. There was absolutely no booze on the train at all. Consequently, there were no passengers in the restaurant car.

“That was it- no one bought the food. People complained and then Railchef, the French company which does the catering changed the menu and made the food slightly better. But without alcohol, the takings are terrible”.

The food was real enough. Halfway decent bread and kofte, but no rice. I asked for doner with rice and was given a tiny portion of rice as they were running out of food. I was so unhappy that I had not brought a bottle of wine of raki with me that I got out at every station and asked the Bufe if they had booze. They were all dry.  The greatest damming indictment of the RailChef food was the fact that the Railchef crew and the Turkish Railways staff all made their own food and ate it

Having come to terms with the mediocre food and no beer, I watched the cypress trees trundle by. There was not a road in sight on either side of the train. The wide open valleys had no houses no villages no roads and no sign of life at all. Then suddenly the train would come around a bend and stop at a Germanic looking railway station with a few huts next to it. Someone would get off and someone would get on. And then around the next hill, the desolation of the Anatolian steppe would continue. Erzincan saw us halt again for water and diesel but no beer. The train lurched out of the station and entered a series of gorges. The dogu mavi was now cutting its own path along the river Euphrates. was literally the train, the river Euphrates. Nothing else. To me this was the most unique part of voyage, we trundled on for two hours in the gorge. The sun streamed down onto the window, showing the dust that has accumulated on the journey as I sipped my Turkish coffee.

The sun grew lower and lower in the sky and  soon an eerie light descended on the gorge. We popped out into the wider Euphrates valley, raced along beside the road, stopped at a few stations and then re entered the gorge.  Some people drifted into the restaurant car, trying the palatable food. We had a light dinner in the narrow valley before popping out again and leaving the river Euphrates behind, we entered a series of long tunnels. These had been blasted through by German engineers and Turkish workmen in the 1930’s. At dusk we exited one tunnel and stopped at Divrigi for our 20 minute refuel and re-water routine. This was the site of a huge castle and medresse on a hill. I had not been here since 1999, but the brown earth mountains on all sides looked the same.

Soon after dark, we climbed into our bunks and lay down to sleep. The A/C in our carriage was asthmatic, so the conductor opened the windows with his trainman’s key. The cool air filled the cabin and I drifted off, only to be woken by the Jandarma asking for papers. They did not seem overly bothered. I fumbled around for our documents and then went back to sleep. We stopped in Sivas and Kayseri, but I remembered little of these stations. I woke long after dawn staring at the rolling fields of Ankara province. At Kirikkale we coasted around the various ammunition , rocket and weapons factories that have supplied the Turkish State since the advent of the rifled barrel.

By now there was an end of term  atmosphere on the train. The sleeping car attendant came and collected our sheets. We folded up our beds and watched the fields, around every bend we hoped we would arrive in Ankara. Two and half hours late, we motored into the outskirts of Ankara and screeched to a halt at platform one. The granite 1930’s railway station was modelled on Stuttgart in 1933 and little had changed since then. The high speed trains left from a glass monolith next door, but we staggered out of our compartment, bought a cup of tea and watched as the Anatolians and tourists who had boarded with us a day ago, wandered off to their respective destinations.  We had arrived in Ankara, the journey was at an end.